TIE CARD AND RESIDENCE FOR TAX PURPOSES IN SPAIN 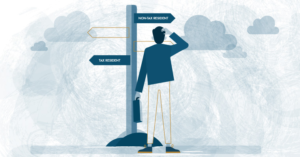 Before Brexit, British holiday home owners in Spain could spend long periods there without any legal impediments. Everything changed on 31 January 2020 when the UK officially became a non-EU country and its nationals became subject to the rules on stay in the Schengen area.

Since then, a UK national can spend up to 90 days in a Schengen country, following which they must remain outside the Schengen area for further 90 days before being allowed back in. This rule has complicated the lives of thousands of British people who, although they did not spend more than half of the year in Spain, did spend a large part of the autumn and winter months there. Since Brexit, if they want to spend more than 90 consecutive days in Spain, they must apply for a Spanish residence permit, which for non-EU citizens is in the form of the Tarjeta de Identificación de Extranjeros (TIE) card.

The good news is that the Spanish authorities, who are certainly aware that British residential tourists are a significant source of income for the country, usually grant residence permits to British citizens quite readily. The bad news is that sometimes the tax authorities take this to mean that they live permanently in Spain and that TIE holders must pay taxes in Spain, not in the country of origin.

This is where matters become complicated because most British people dread Spanish bureaucracy and the Spanish tax office. We have received countless queries from clients in recent years asking us to clarify their tax status in Spain and whether applying for a TIE card automatically results in them being considered residents for tax purposes in Spain. The following is a summary of current legislation in this field and how the tax office usually proceeds in such cases.

1.- Does possession of the TIE card automatically result in me being considered a resident for tax purposes in Spain?

NO, and here is why.

Residence for tax purposes in Spain is regulated under articles 8 and 9 of Law 35/2006, 28 November, on Income Tax.

Article 8 states that anyone who habitually resides in Spain must pay income tax in Spain.

What does ‘habitually reside’ in Spain mean?

Article 9 explains this, stating that individuals are considered to reside habitually in Spain when:

That being so, at no time does the law state that owning a residence (or TIE) card automatically means that an individual is considered a resident for tax purposes in Spain.

2.- Can the Spanish Tax Office assume that owning a TIE card is a sign that the individual resides habitually in Spain?

YES, and here is why.

The rules on applying for a TIE card are established in articles 210 et seq. of Royal Decree 557/2011, 20 April, which approves the regulations of Organic Law 4/2000, on the rights and liberties of foreigners in Spain and their social integration.

Article 210 states that all foreigners issued with a visa or authorisation to remain in Spain for more than six months are entitled to and obliged to apply for a TIE card.

Despite the above, if the Spanish Tax Office does consider that the fact you have applied for a residency permit for more than 6 months to mean that you intend to live in Spain for more than that period and you receive a notification in this sense from them, you will need to gather a series of legal arguments (and patience) to challenge their allegations and prove that you are NOT a resident for tax purposes in Spain and therefore do not need to pay taxes there.

You must bear in mind that if you have a temporary residence permit (the TIE card specifies whether it is temporary or permanent), if you remain outside Spain for more than 6 months your permit will automatically expire (according to article 162.1 of Royal Decree 557/2011, 20 April) without the foreigner’s office needing to notify you of this decision. In other words, you cannot use the same temporary residency permit year after year and argue that you are a resident for tax purposes in the UK because if you declare that you spend more than 6 months in that country this will mean your residency permit has expired and you should have handed your TIE card into the foreigner’s office.

3.- Is my application for a TIE linked to the fact that I have received a letter from the Spanish Tax Office (AEAT) who believe that I am a resident for tax purposes in Spain and I must pay taxes in Spain?

Not usually. In our experience so far, the fact that a British citizen applies for a TIE does not ‘raise an alarm’ at the tax office.

What does usually cause us to receive that dreaded letter is an exchange of information between the British and Spanish tax offices (HMCR and AEAT respectively) which takes place automatically under the OECD Common Reporting Standards on the exchange of financial account information, to which both Spain and the UK have committed. This information usually comes from the banks with which we work in the UK, which for reasons such as our own statements (we have said as much to them) or an error on their part (e.g. they have noticed we make lots of transfers from our British account to our Spanish account) they arrive at the conclusion that we are residents for tax purposes in another country. When this happens, and without us realising it, our bank notifies the HMCR, they notify the AEAT, and so the problems begin.

In addition, banks supply vast amounts of information to the AEAT. Therefore, if those banks detect that an individual is regularly receiving a pension from the UK, they will notify the tax office and this will use it as an argument to consider that that individual is a resident for tax purposes in Spain.

There is a common misconception among most British people that the Spanish tax system is a ‘shambles’. Precisely due to the tendency among most Spanish people to evade taxes in the past, the Spanish tax office has invested a huge amount of resources into clamping down on fraud, implementing a computerised information exchange system between Spanish banks, all government departments and the tax office. This is probably one of the most effective in Europe and means that any money that a person sends between banks, receives from government institutions, or uses to buy property at Spanish notary offices is reported to the Spanish tax office’s computer systems, and results in the latter concluding that the person is a resident for tax purposes in Spain.

Applying for a TIE card is therefore NOT the reason that the Spanish tax offices consider a person to be a resident for tax purposes in Spain, it is all of this information sharing and reporting, of which we are often not even aware.

4.- What should I do if this happens?

If you have not actually spent more than 6 months of the year in Spain, you must respond to the tax office’s summons by submitting all of the proof you have available to show this is not the case. This is usually the following documents:

All of these documents issued in the UK must be translated into Spanish by sworn translators authorised by the Spanish Ministry of Foreign Affairs.

The above documents should suffice to prove that a person is a resident for tax purposes in the UK and not in Spain. However, it should be stressed that sometimes, even having submitted all of these documents, the Spanish tax office rules that the person’s residence for tax purposes is not in the UK. This is when you will have to appeal the decision before the appropriate economic-administrative court, where, based on this submitted proof, you will usually win.

As you can see, the tax office has many resources available to find out the tax status of anyone living in Spain, and with the help of technology, IT resources and international information exchange agreements, it will probably become even easier for them to find out where both people and their assets are located in real time.

TempleCAMBRIA therefore recommends that, to avoid potential investigations and penalties by the Spanish tax office, anyone who lives permanently in Spain should rectify their situation and register as residents for tax purposes in Spain to comply with the tax obligations set out in the UK-Spain double taxation convention.

Head of taxation and accounting department:

Please note that any information provided through TempleCAMBRIA’s blogs, website or social media pages is for informational purposes only and should not be used as the basis for making any particular decisions. Please remember that legislation and case law can change over time and the articles published through this medium may not be up-to-date, which is why we recommend you seek individual specialist advice.

TempleCAMBRIA law firmprovides legal services to international clients who have become enamoured with the Costa de la Luz. Our job is to ensure that their decision to settle down or set up business here is a successful one, and that their time here becomes the best experience of their lives.